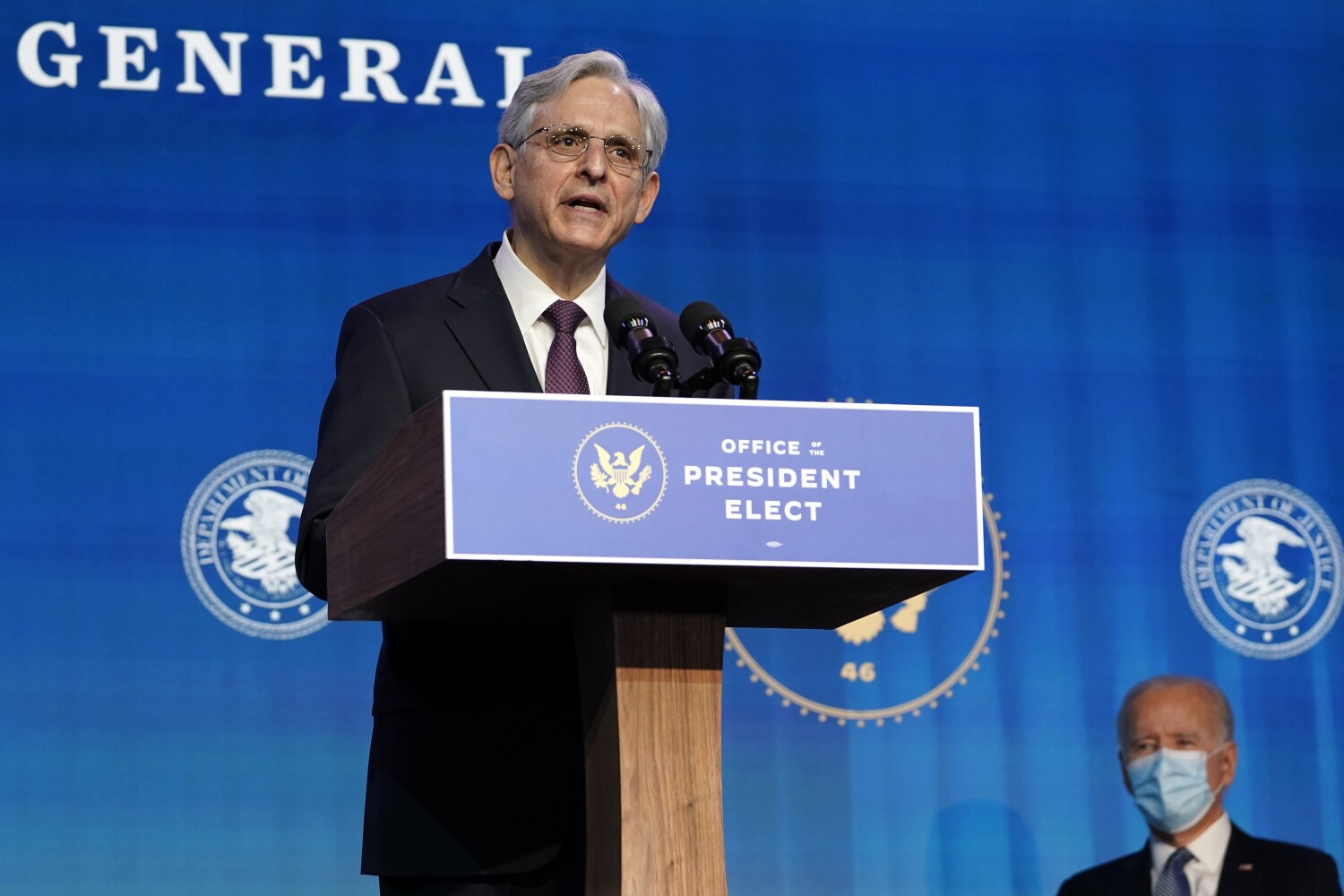 Merrick Garland appeared headed to easy confirmation as attorney general after a hearing Monday during which the soft-spoken federal appellate judge won praise from senators of both parties as he promised to aggressively investigate the U.S. Capitol attack, boost enforcement of civil rights laws and enact other major changes at the Justice Department, including a likely moratorium on federal executions.

The 68-year-old’s low-key demeanor was in sharp contrast to the brash approach at hearings by former Atty. Gen. William Barr, who frequently sparred with lawmakers over Trump administration prerogatives and the scope of executive power. By contrast, President Biden’s nominee quietly emphasized he would cooperate with congressional investigations and would not tolerate interference in federal probes by the White House. Former President Trump repeatedly urged his attorneys general to launch criminal investigations of his political rivals and to go easy on his associates.

If confirmed, Garland will face the politically fraught tax probe of Hunter Biden, the president’s son, and potential investigations of Trump and his associates.

“I am not the president’s lawyer,” Garland testified. “I am the United States’ lawyer, and I will do everything in my power, which I believe is considerable, to fend off any effort by anyone to make prosecutions or investigations partisan or political in any way.”

Sen. Richard J. Durbin (D-Ill.), the chairman of the committee, told reporters he expected his panel would vote on the nomination early next week, with a floor vote coming a few days later. The hearing is scheduled to continue Tuesday, with witnesses testifying about Garland’s character and legal career.

He also spoke openly about what he considered to be the death penalty’s flaws.

“I am very concerned about the large number of exonerations that have occurred through DNA evidence and otherwise, not only in death penalty convictions, but also in other convictions,” Garland said. “I think a terrible thing occurs when somebody is convicted of a crime that they did not commit. And the most terrible thing happens if someone is executed for a crime they did not commit.”

The death penalty, he added, has an “enormously disparate impact on Black Americans and members of communities of color.”

Garland also said that death sentences in the U.S. had become so rare that there was a risk that they were now “arbitrary” and “random” — the grounds on which the Supreme Court abolished capital punishment nationwide for a few years in the 1970s.

His comments came on the same day the legislature in Virginia, a state that once led the nation in executions, voted to abolish the death penalty, a further sign of declining public support.

With few conflicts between the nominee and the senators, the hearing’s emotional high point came after Sen. Cory Booker (D-N.J.) asked Garland to explain his commitment to combating discrimination.

“I come from a family where my grandparents fled anti-Semitism and persecution. The country took us in and protected us. And I feel an obligation to the country to pay back,” Garland said, his voice cracking. “This is the highest, best use of my own set of skills to pay back.”

Garland testified that as attorney general he would focus on reducing disparities in housing, education and the courts, noting that Black people and members of minority groups are bearing “the brunt of harm caused by pandemic, pollution and climate change.”

He said he would seek to reduce incarceration, particularly of Black men, by ensuring prosecutors targeted violent criminals, not low-level drug offenders. Garland testified that the Justice Department would “look closely and be more sympathetic towards retrospective of reductions in sentences,” a move that would allow nonviolent drug offenders to return home, freeing space in prisons for more dangerous individuals.

Democrats said such an approach was urgently needed. “Too many Americans, whether because of race, national origin, disability, sexual orientation or gender identity, face inequality in their daily lives,” Durbin said. “It is high time for the Department of Justice to confront these realities that unfortunately continue to threaten” democracy.

Senators pressed Garland repeatedly to confirm he would take seriously the attack on the Capitol, and Garland promised that the investigation into the Jan. 6 siege would be his top priority. The Justice Department has charged more than 250 people for being part of a pro-Trump mob that stormed the Capitol seeking to block the counting of electoral votes that cemented Joe Biden’s victory. Five people, including a Capitol police officer, died in the assault.

“This was the most heinous attack on the democratic processes that I’ve ever seen, and one that I never expected to see in my lifetime,” Garland said, adding he would make sure prosecutors and agents had “all the resources they could possibly require” in what he hoped would be an expansive probe.

“I intend to make sure that we look more broadly,” he said, “to look at where this [threat] is coming from, what other groups there might be, that that could raise the same problem in the future, and that we protect the American people.”

A graduate of Harvard Law School, Garland worked for a big law firm before joining the Justice Department in the 1980s to become a prosecutor. When Bill Clinton became president, Garland was tapped to take a top role in the deputy attorney general’s office. From that perch, he helped supervise the investigation into the 1995 Oklahoma City bombing, the worst act of domestic terrorism in U.S. history. Though Garland now has concerns about the death penalty, he had no such reservations about pursuing such a sentence for Timothy McVeigh, an Army veteran and right-wing extremist who was convicted in 1997 of planting the bomb that killed 168 people. McVeigh was executed in 2001.

In his testimony, Garland said overseeing that investigation informed his thinking on how to battle the current threat posed by domestic terrorists and extremists.

Garland left the Justice Department in 1997 when he won confirmation to become a judge on the U.S. Court of Appeals for the D.C. Circuit, which is considered one of the most influential courts in the nation.

President Obama nominated Garland in March 2016 to take the seat of the late Supreme Court Justice Antonin Scalia. But the GOP-controlled Senate refused to consider the nomination, leaving it open for the next president to fill. Trump successfully won confirmation of Neil M. Gorsuch, a conservative, to the court.

Despite blocking Garland’s assent to the Supreme Court, powerful Republicans signaled they respect the judge, easing his way to a speedy confirmation vote.

Sen. Chuck Grassley (R-Iowa), the ranking GOP senator on the panel, said, “No one doubts that Judge Garland is qualified for the job. … I just want to say that I like you, I respect you.”

In response to questions from Graham and Grassley, Garland pledged to respect special counsel John Durham’s inquiry into the federal investigation of Russia’s interference in the 2016 election and alleged ties between Moscow and the Trump campaign.

Garland told Graham he had read the executive summary to a lengthy Justice Department inspector general report published in December that revealed major failings in how the FBI obtained warrants from the Foreign Intelligence Surveillance Court to clandestinely gather information on a former Trump campaign advisor.

“There were certainly serious problems with respect to FISA applications,” Garland said, adding that he believed the FBI was working to address the shortcomings.

As Biden revamps immigration, many at border camp wait, worry