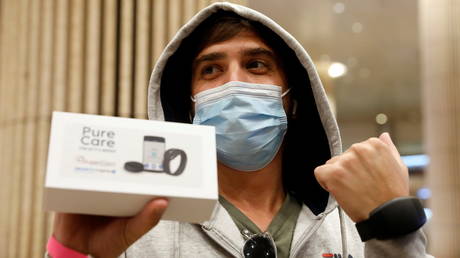 Israel has unveiled a coronavirus tracking bracelet as an alternative for a two-week quarantine for incoming travelers, sparking privacy concerns as a top court moved to curb the Shin Bet spy agency’s role in contact tracing.

A pilot program for the tracking bracelet kicked off at the Ben Gurion airport on Monday, where 100 devices were doled out to arriving travelers as a way to avoid a stay at a military-administered quarantine hotel. Instead, those opting for the bracelet system – which features the electronic wristband, a smartphone app and a wall-mounted tracking device – will be free to return home to wait out the two-week isolation period.

While the device will alert authorities if participants venture too far from the wall-mounted tracker, Ordan Trabelsi, the CEO of SuperCom, the company behind the bracelet, said it does not collect any other information, insisting the tech is minimally intrusive.

“Nobody is forced to do it, but for those who are interested, it gives them another option: more flexibility,” he said.

We call it a ‘freedom bracelet’ because we are not locking anybody up, but rather giving them the opportunity to go home.


The pilot project – which Trabelsi has already called to expand to “thousands of units” for “wide-scale use” – may trigger further anxiety given SuperCom’s past work with a number of governments around the world to provide “offender monitoring” services, using its tracking tech to surveil prisoners and detainees. The firm signed a contract last year with a government agency in Wisconsin to offer the same service, and also sells technology used for electronic IDs, voter biometrics and cybersecurity.

As the roll-out for the tracking bracelets got underway on Monday, Israel’s top court ruled that the country’s domestic spying agency, the Shin Bet, must rein in its Covid-19 contact tracing efforts, calling the surveillance “draconian” and a threat to Israeli democracy. While the government has employed the Shin Bet for tracing since last March, the court has repeatedly challenged the practice, finally ruling that the agency may only be used under special circumstances beginning on March 14.

“From [that] day on, the use of the Shin Bet will be limited to cases in which a confirmed coronavirus patient was not cooperating in his (epidemiological) investigation, whether intentionally or not, or gave no report of his encounters,” the court said.


Israeli authorities have already unveiled a ‘vaccine passport’ system, allowing those who’ve received inoculations to access certain public spaces still closed to the unvaccinated. Similar ideas have already taken hold elsewhere, with the European Commission set to hear proposals for EU-wide vaccine passes in the coming days. Meanwhile, a number of countries, such as South Korea and Thailand, have launched tracking programs using apps and bracelets reminiscent of the new initiative in Israel.