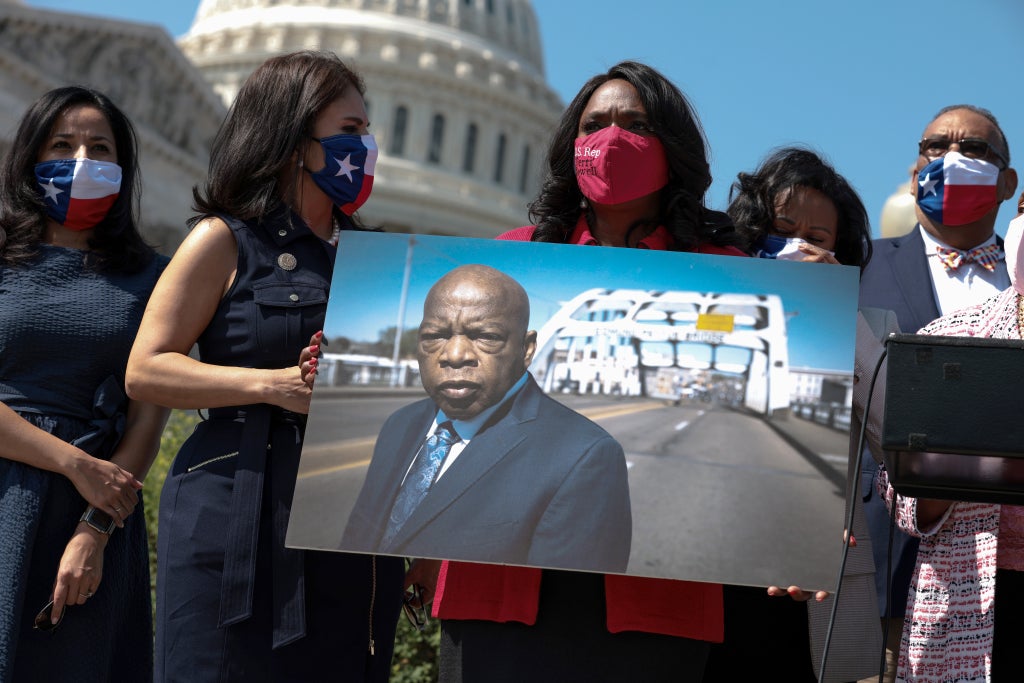 Democrats in the House of Representatives have passed a bill, named in honour of late civil rights leader and congressman John Lewis, to revive and strengthen the 1965 Voting Rights Act against racially discriminatory voting laws after a pair of US Supreme Court rulings undermined key elements of the landmark civil rights law.

It also recognises a growingly conservative judiciary and a Supreme Court that has repeatedly stripped vital constitutional protections on voting rights – leading up to once-a-decade redistricting sessions that for the first time in decades will be drawing up congressional and local election districts without those guardrails.

The bill targets how the courts determine rules for deciding election cases that involve discrimination, and would restore and rebuild parts of the Voting Rights Act that provide some of the most powerful enforcement arms against voter suppression.

Mr Lewis – whose skull was crushed by police on the Edmund Pettus Bridge in Selma, Alabama during 1965’s Selma-to-Montgomery marches – was instrumental to the passage of the Voting Rights Act, which aims to enforce voting rights guaranteed by the 14th and 15th Amendments with broad protections against racially discriminatory election laws and procedures.

He was arrested at least 45 times in defence of the rights he sought to protect and would return to the Edmund Pettus Bridge throughout his life to recognise the anniversary of the Selma crossing. He died on 17 July, 2020.

The law was amended five times since its passage, but the latest version – with every House Democrat signing on as its co-sponsor – faced near-universal opposition from congressional Republicans, who have dismissed claims of nationwide voter suppression attempts while endorsing efforts to roll back ballot access.

Democrats passed a version of the John Lewis bill in 2019, but it languished under a then GOP-controlled Senate. The current version will likely meet a similar fate in the Senate unless Democrats can overcome a filibuster.

“As John Lewis would say, when you hear something or see something that is not right, that is not just, that is not fair, we have a moral obligation to do something about it,” said US Rep Terri Sewell, whose district encompasses Selma.

“This campaign is anti-democratic, it is dangerous and it demands action,” she said.

The Supreme Court’s 2013 ruling in Shelby v Holder struck out federal “preclearance” guidelines that required federal approval from states with histories of racial discrimination at the polls before implementing new elections laws.

Chief Justice John Roberts wrote against preclearance provisions for the court’s 5-4 opinion, arguing that “things have changed dramatically” following the Voting Rights Act’s passage, and suggesting that discriminatory laws were a thing of the past.

But the court also invited Congress to update the formula for how to review discrimination, one that should be “grounded in current conditions” and target jurisdictions where discriminatory election laws and their impacts are pervasive.

In the biggest proposal under the bill named for Mr Lewis, Congress would do exactly that – a new “rolling” coverage formula would “continuously” move to keep up with “current conditions.”

The Supreme Court said that if Congress wants some states to fall under preclearance, but not others, it “must identify those jurisdictions to be singled out on a basis that makes sense in light of current conditions.”

Under the John Lewis Act, preclearance would fall on states with “15 or more voting rights violations” within the previous 25 years, or that have committed 10 violations if “at least one of which was committed by the state itself.”

States that have “repeated and persistent violations will be covered for a period of 10 years, but if they establish a clean record moving forward, they can come out of coverage,” according to a bill summary.

After passage of the Voting Rights Act in 1965, the US Department of Justice rejected more than 1,000 proposed changes to voting laws to prevent discriminatory outcomes.

But after the high court’s ruling in 2013, states closed hundreds of polling places, disproportionately targeting areas with voters of colour, while GOP lawmakers filed scores of restrictive voting laws – culminating in a massive, right-wing lobby-backed campaign to roll back ballot access and consolidate power.

Attorney General Merrick Garland, who has vowed to challenge new restrictive voting laws, wrote in The Washington Post that the Justice Department “has been unable to stop discriminatory practices before they occur” without federal protections that have been gutted by the Supreme Court. Instead, the department is “left with costly, time-consuming tools that have many of the shortcomings that plagued federal law prior to 1965.”

Within the first few months of 2021, GOP lawmakers – emboldened by former president Donald Trump’s persistent lie that the results of the election were “stolen” or manipulated – filed nearly 400 bills in nearly every state to roll back voting by mail, impose strict voter ID requirements, cut back on early voting hours and criminalise handing out food and water in long lines at polling places, among other measures.

By mid-July, at least 18 states enacted 30 new laws that restrict access to the ballot, according to the Brennan Center for Justice at NYU Law.

A parallel effort from GOP lawmakers has seen more than 200 bills in 41 states that would give themselves more authority over the electoral process, according to the States United Democracy Center.

Earlier this year, the Supreme Court dealt a crucial blow to the Voting Rights Act’s Section 2, which prohibits election laws that “deny or abridge” the right to vote based on race, which Congress has defined as policies that are either intentionally discriminatory or have had discriminatory outcomes.

But in July, the Supreme Court’s ruling in Brnovich v Democratic National Committee upheld a pair of Arizona laws that critics argued have disproportionately hurt minority voters, with a majority decision that also made up its own new “guideposts” that voting rights advocates have argued will make it more difficult to challenge discrimination in court.

Justice Elena Kagan criticised the majority opinion for issuing “its own set of rules, limiting Section 2 from multiple directions.”

The John Lewis-named legislation takes aim at the Brnovich ruling by prohibiting courts from relying on those elevated standards in reviewing Voting Rights Act cases, an apparent effort to roll back the Supreme Court’s “guideposts” that could set a precedent in fighting future discrimination.

The bill also instructs courts to consider other discriminatory factors when hearing such cases, including the history of discrimination in the state and the impacts of racism across impacted jurisdictions, from education and employment to health disparities.

Following a wave of election litigation dismissed by the courts in 2020 and the high court’s reliance on the so-called “shadow docket” that has pushed through emergency applications in election cases, the John Lewis bill also undercuts the courts, arguing that they must give “substantial weight” to the concerns of voters, and that “proximity of the action to an election shall not be a valid reason” to reject voting rights cases.